THE TEMPLE OF BRAMANTE 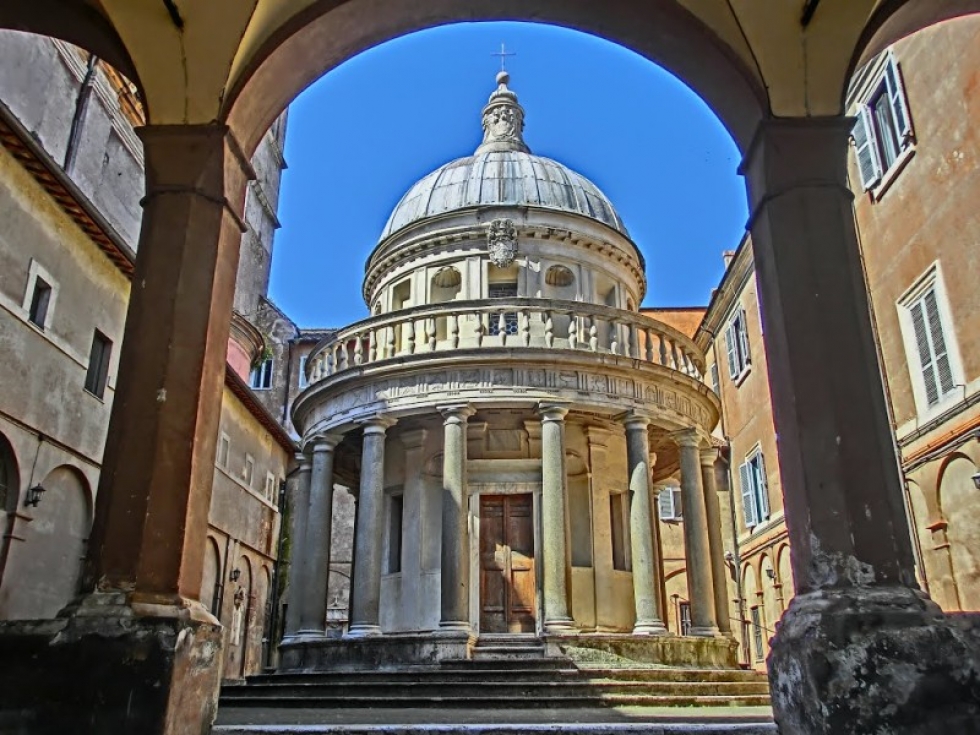 Absolute masterpiece of the Renaissance art and evident example of the Italian ingenuity, the temple of Bramante is one of the most popular and admired works of the history of architecture.

The moving perfection of its forms is examined to this day by scholars and artists from all over the world. This little temple was built by an extremely famous architect of the Renaissance, Donato Bramante, at the beginning of the 1500s. Probably, the project dates back to 1502, but there are many doubts about the exact date of its realisation. It is known, though, that the work was commissioned by the king of Spain. The temple stands in a courtyard of the convent of Saint Peter in Montorio’s church, right where, according to the medieval tradition, Saint Peter was crucified. The small temple consists in a cylindrical cella, surrounded by a row of 16 granite columns supporting the entablature beautifully decorated with a frieze. Over the entablature, there is an elegant balustrade all along the perimeter of a small tambour that supports the dome, which is covered in lead. The cella, with a diameter of just 4 meters, was not meant to host religious celebrations, but it was a purely symbolic room. This explains the small dimensions. On the inside, there are large niches on the walls, 4 of which host the evangelists, and a simple altar, with a small statue of Saint Peter, probably made by an unknown Lombard sculptor at the end of the 1400s. Some of the most beautiful features are the pavement in polychrome marbles, recalling the art of the Cosmati masters (characterizing the medieval period), and the small dome, whose radius is equal to the height of the tambour on which it lays. Donato Bramante shows, in this way, to have properly studied and assimilated the building techniques of the ancient Romans. Moreover, the small dome is made of concrete, material used by Romans even for the construction of large domes. Nevertheless, the most characteristic space of the temple, under the floor itself, is the crypt, accessible through an external staircase built in the 1600s (originally there was just a narrow staircase behind the altar). In the middle of this underground room, small as well, there is a hole in which, according to the wrong medieval tradition (as said before), the cross of the Prince of the Apostles was inserted. The crypt is circular and this characteristic too makes us understand how Bramante looked up to Roman art with an extreme respect. In the Antiquity, the circular plant was connected to the idea of perfection and divinity. Moreover, we can see important references to the art of Vitruvius, architect and writer of the 1st century BC, such as the single row of columns running all around the temple or the even number of these columns: 16. Undoubtedly, this was not a random choice, since the number 16 was an emblem of perfection for Romans, and not only, for it is the sum of two 8 (symbol of infinity, but also of death and resurrection). Vitruvius declares and articulates the fundamentals of Roman architecture in his “De Architectura”, “On Architecture”, a milestone of the history of art and architecture, that certainly Bramante read with attention and admiration. With his temple, he enhanced classical art, its principles and its rules, updating it to the Renaissance fashion, and deeply contributing to the spread of its revival. In fact, its temple was taken as an example by many architects, such as the brilliant Andrea Palladio. Furthermore, many extremely famous monuments built in the following centuries, such as the Kazan Cathedral in Saint Petersburg or the United States Capitol’s dome in Washington D.C., are a clear reference to this masterpiece. A true model for the Renaissance, no doubt about it!