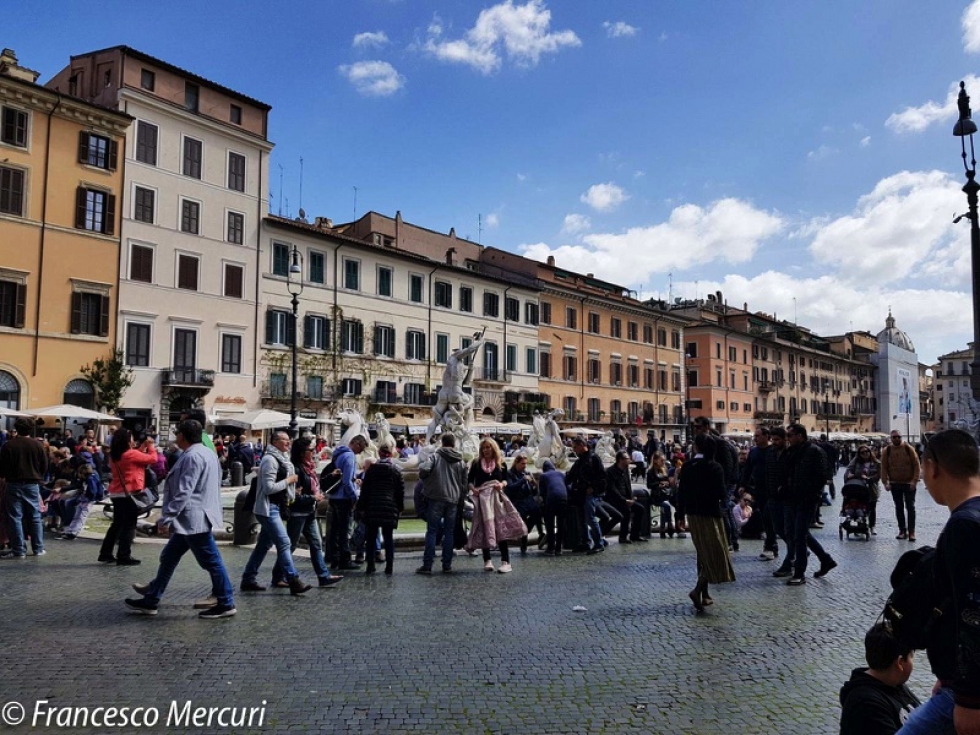 Among the most scenographic squares of the Eternal City and, probably, among the most famous squares in the world, Piazza Navona always strikes for its sober elegance, characteristic that makes it unique.

As the shape suggests, the square was built over the remains of the Stadium of the emperor Domitian, son of Vespasian and brother of Titus, which was inaugurated in 85 AD. Stadiums in ancient Rome hosted what today we would call athletic competitions. For this reason, they were different from circuses (like the Circus Maximus), that hosted horse and chariot races, and amphitheatres (like the Colosseum), that hosted gladiator fights. It seems that the presence of the Stadium had a role in naming the square; “Navona” would be an evolution of the term “agone”, meaning “competition”. Some people, however, believe that the name comes from the use of the 17th century of flooding squares in hot summer nights, to simulate “naval” battles. Piazza Navona was built in the shape we know today around 1650 AD by Pope Innocent X, that turned it into the headquarters of his family, the Pamphilii. Ever since the late Middle Ages, when it was called “Campus Agonis”, it had belonged to the Conservatori (magistrature of the district of Rome) that used it for entertainment purposes. The dimension is pretty close to that of the Stadium of Domitian underneath: 300 metres long and a bit more than 100 metres large. It is dominated by 3 splendid fountains, inevitable destination for tourists of every nation. The “Fontana del Moro” and the “Fontana di Nettuno”, placed almost at the far ends of the square, frame the “Fontana dei Fiumi”, masterpiece of Baroque art and real center of Piazza Navona. It was made by Gian Lorenzo Bernini, that wanted to represent the four most important rivers in the world (Nile, Rio de la Plata, Danube, Gange) through stone giants. The manifestation of the famous rivalry between Bernini and Borromini through the raised hand of one of the giants (Rio de la Plata) to cover the sight of the church of Sant’Agnese in Agone (made by Borromini) is just a product of people’s fantasy. Indeed, the church, located here because according to the Christian tradition this is the place where the Saint was tortured, was built after the completion of the fountain in 1651. Next to the church, one of the most brilliant examples of the artistic virtuosities of Borromini, there is Palazzo Pamphilii (Pamphili Palace). The Palace is a splendid example of a 17th century building, built by Pope Innocent X, when he became Pope, to replace the old family dwelling in the same spot. It is one of the most famous works of Rainaldi, although, considering its dimension, many of the most important artists of the time, like Francesco Borromini and Pietro da Cortona. Today, this beautiful palace hosts the Brazilian Embassy. Considering the attractiveness of the square for tourists, the market, that moved here at the end of the 1400s from Piazza del Campidoglio, slowly moved to Piazza Campo de’ Fiori (where it still is), leaving space in Piazza Navona for the tables of many restaurants. Now, there are also many street artists considering it the perfect location for their exhibitions. The view is breathtaking. There is also a very interesting news about the Stadium of Domitian: its remains can be visited. Therefore, you can not only walk in Piazza Navona, but also under it. Moreover, how can we not mention that January 6th the square is full of children? It seems, indeed, that the Befana comes here with her broom!

Read 1644 times Last modified on Thursday, 24 January 2019 19:19
Tweet
Published in Ponti e Piazze
More in this category: « The Cursed Bridge
back to top