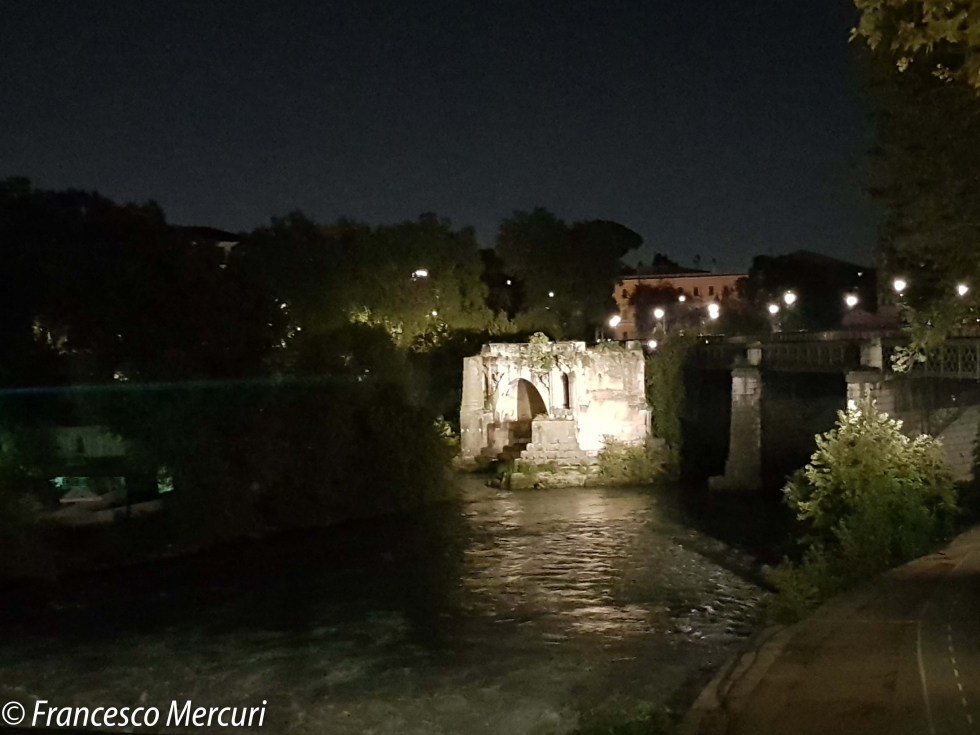 Between the Tiber Island and the “Ponte Palatino”, in the middle of the riverbed stands a very mysterious ruin. It is the last standing arches of the most ancient stonework bridge of the city of Rome.

Between the Tiber Island and the “Ponte Palatino”, in the middle of the riverbed stands a very mysterious ruin. It is the last standing arches of the most ancient stonework bridge of the city of Rome.

This bridge – almost completely destroyed during the flood of 1598 – it’s nowadays called “Ponte Rotto” (“Broken Bridge”). This building was originally called “Pons Aemilius” because it was thought to have been created by will of censor Marcus Aemilius and censor Marcus Fulvius Nobilior – the ones that built the “Basilica Aemilia” in the heart of the Roman Forum -. However, it seems to have been built previously – about 241 B.C. – and its customer to have been Manius Aemilius Lepidus. Initially the bridge was entirely made of wood until in 179 B.C. the pillars got replaced with stone ones and in 142 B.C. a stonework arches took the place of the old one. In the same year the wood gangway was replaced by another one in stone. It therefore became the first stonework bridge of the city and with its 71 meters of length and 6 arches also the longest. This bridge was particularly important because it connected the two banks in a very strategic point: on the right side – since the Early Republic – there were the Jewish community and the merchants’ one, which settled there after arriving in the city; while on the left side stood the beautiful “Porta Flumentana”, one of the breaches of the ancient Servian Wall. From this gate you could easily reach the Roman Forum and the Capitoline Hill. In 12 B.C. “Pons Aemilius” was restored by Octavius Augustus and so it was called “Pons Maximum” because the Emperor was also the Maximum Pontiff. This name was maintained till 872 A.D. when Pope John VIII converted the old Temple of Portunus in the church of Saint Mary of Egypt. That’s why the bridge was called “Saint Mary Bridge” from IX to XII century when the name changed in “Ponte Senatorio”. The bridge was restored many times because of the many overflows of the Tiber. It was originally restored in 280 A.D. during the Imperial Age, and then had different conservation interventions in 1230, 1422, 1450, 1552 (with the supervision of Michelangelo), in 1557 and 1575 (by will of Pope Gregory XIII). In 1598 a ruinous flood of the river destructed half of it, and it was never rebuilt again. Of the once marvellous bridge only 3 of the 6 arches remained, laying in the middle of the river. During the second half of the XIX century they were connected to the left bank of the Tiber with an iron walkway. When in 1887 this walkway was removed, the two arches nearer to the right bank were destroyed in order to create the containing embankments of the Tiber. Therefore, just one arches was left standing (the one that we can see today) which had an image of a dragon sculpted on it in different points, that was the heraldic symbol of the Boncompagni family (the one of Pope Gregory XIII). During the Middle Ages the bridge was believed to be cursed, due to his repeated collapses. This myth was also supported by the many mortal incidents that occurred throughout the centuries. In fact, it seems that at the beginning of the Medieval period, this was the “favourite” place for people who intended to commit suicide. The bridge is also linked to a particularly macabre historical event. It is believed that in 222 A.D. – from this very bridge – the dead body of one of the most evil Emperor of Roman history was tossed: Elagabalus. From what we know the Emperor was so much hated by the citizens that his body was even tied to a stone not to make it resurface. Actually the unlucky life of “Pons Aemilius” is linked to its building procedure. Not only it was placed in a part of the river where the current was way faster, but it was also built obliquely, favouring the resistance of the water. A fatal mistake.