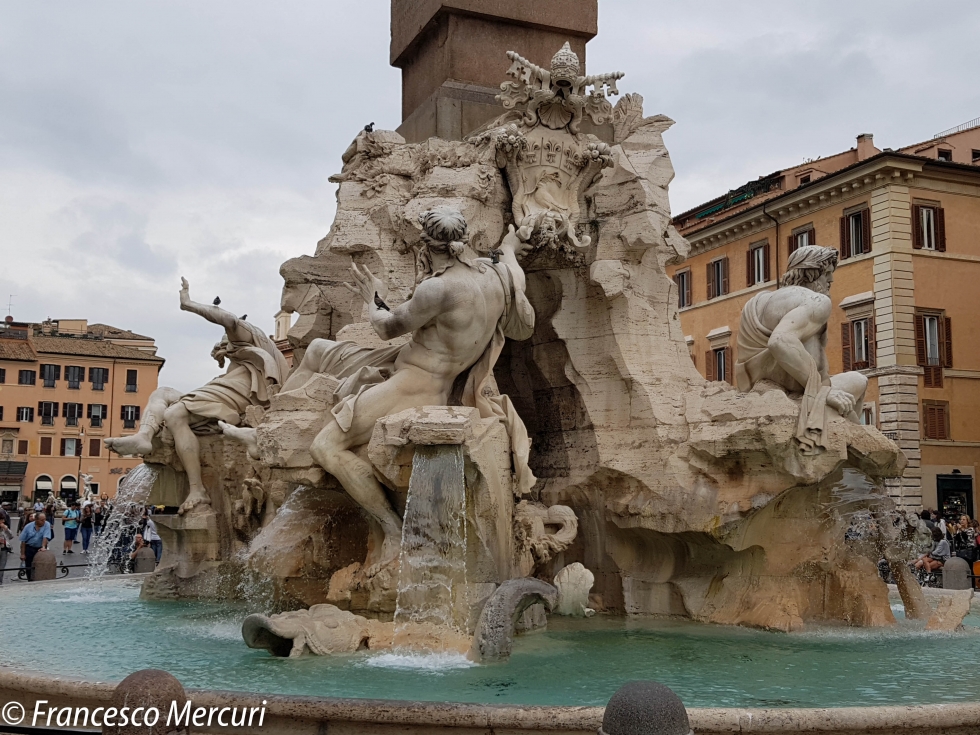 One of the greatest and more brilliant artists to ever lived– as we had already pointed out – was Gian Lorenzo Bernini. He was a sculptor, a painter and an architect of the XVII century who gave his best in the Eternal City with one of the most fruitful artistic production in the history of art.

But there’s one work among the Roman Bernini’s production that can be considered as a turning point for the Baroque sculpture; and it isn’t even one of his most famous works!We are talking about “Triton Fountain” located in Piazza Barberini (Barberini Square) – the square from which starts Via Veneto - . This fountain is often underestimated by tourist which walk right by it without giving it the right consideration. It was built at the end of 1642 by will of Pope Urban VIII (born Maffeo Barberini) who had a luxurious palace that faces the square built a few years before. The fountain is entirely made of travertine and it’s composed by a large tank almost on the floor level on which lay 4 dolphins that emerge from the water with their mouths opened and sustain a big shell with their tailfins.This shell is opened and on the top of it there’s Triton sitting with an austere posture, a powerful torso and scaled legs. He tilts his head back while blowing in a small shell he holds with his strong hands. From this small shell gushes a trickle of water. The fountain really has remarkable dimensions: it passes 6 meters of height and the tank has a diameter of almost 14.The main character of the monument is indeed Triton – a sea deity – son of Poseidon (Neptune for the Romans) and Amphitrite, a Nereid. He was characterized by a violent and bellicose spirit, and it is believed that he always carried with him a horn - made out of a shell – which was used to placate the storms and announce the arrival of his father. In making this fountain Bernini recalled a traditional theme: the sea deity who emerges from the waters and using his horn he communicates to the world the gods’ triumph. In fact it’s easy to underline the strict connection between the Ancient world and the new figure of Triton which it’s used by the artist to communicate the triumph of the Pope and his family (the four dolphins’ tailfins entwine the papal tiara and the heraldic Barberini’s symbol: 3 bees). In the Ancient times and trough the coming centuries Triton was always depicted with a human upper body and a fish-like lower parts, and was characterized by an horrific aspect. Bernini instead, captured the deity in his work as an example of strength and elegance. If we concentrate on the fountain a little bit we can notice a very unique and innovative feature that we couldn’t have found in the works of the earlier centuries: the base of the sculptural group is empty. There is indeed space between the dolphins’ tailfins and not the traditional pillar supporting the statue. This innovation changed the art of sculpture forever.By making this the artist obtained two important results. In a first place, it gave the entire sculpture a new sense of grace, appearing to the eye of the tourist both mild and dynamic (the traditional sense of oppression felt in front of powerful artistic works is now replaced by the shape’s harmony).On the other hand, through this technic invention the artist showed his whole talent: succeeding to balance the statue without a proper basement wasn’t easy! Adding the fact that sculpting in this way was a very hard job. Therefore, we can enhance some of the unique characteristic of Bernini’s nature and personality: his undeniable brilliance and his amazing self-awareness. He wasn’t certainly afraid of innovating and freeing his intuitions. A genius indeed.