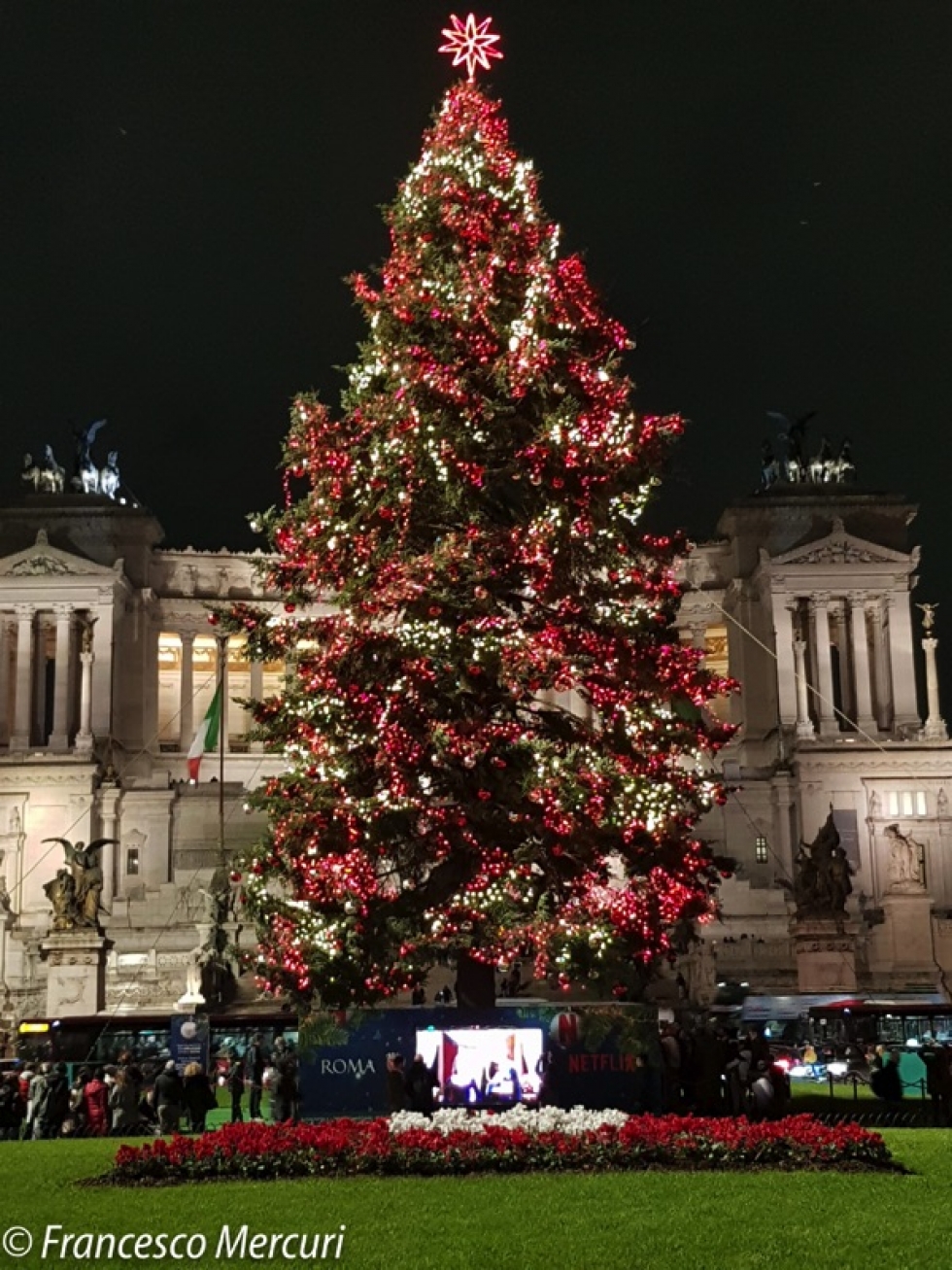 Christmas is a Christian holy day to remember and celebrate Jesus Christ’s nativity. It is held every year on December 25th and observed throughout the Christian world. There are many traditions linked to Christmas, and, of course, they are different depending on the country and local culture. The first news about Jesus’ birth in relation to this day is from the beginning of the 3rd century CE, much before the fall of the Western Roman Empire (476 CE). In Rome, the first official celebration of Christmas in 336 CE, under Constantin.The date is of course conventional. The festivity overlapped with the pagan celebrations of the "Sol Invictus”, a feast day introduced by the emperor Elagabalus (around 220 CE), celebrating the invincibility of the Sun in the day of the emperor’s birthday. Developed throughout the centuries in the whole Christian world, Christmas became particularly popular because of its cultural and social aspects in the rest of the world, like no other religious or laic festivity before.

Christmas is particularly celebrated in Rome, capital of Christianity. Christmas traditions are globally well-known, but often people forget that they date back to ancient Rome. In addition to the date, taken by a Roman festivity, as said before, Christmas took from the Classic world also the custom of exchanging gifts and having long and rich meals. The 25th of December, indeed, used to close the Saturnalia. This festivity celebrated in ancient Rome was a sort of Carnival to venerate Saturn, god of the mythic Golden age, protector of the harvest and of the countryside, and guardian of the souls of the deceased ones, that during the Saturnalia came back to Earth. The idea of exchanging gifts and organizing feasts for the deceased ones and for Saturn was born by the necessity of “fostering” a good harvest for the following season. Also the Christmas tree, another symbol of this festivity, goes far back in the past. Germanic people used to deck fir trees (believed to be sacred) with bells, lamps and colorful objects the days dedicated to their deities, Odin in particular. In the same way, Romans adorned their houses with pine branches to celebrate the new year. With the diffusion of Christianity, holly took the place of pine branches, since it recalled Christ’s crown of thorns and his Passion in a more evident way. The tradition of the “presepe”, the Italian static nativity scene, instead, was born in the Middle Ages in Greccio thanks to Saint Francis of Assisi. It was Christmas of 1223. The first “presepe” in the Eternal City, the oldest made in marble, is still in the basilica of Santa Maria Maggiore, in the crypt of the Sistine Chapel (same name as the one in the Vatican). The "presepe” made by Arnolfo di Cambio represents the holy family, the Magi, the ox and the donkey (8 characters in total). It was made in 1288 under Pope Nicholas IV’s suggestion in occasion of the restoration of the basilica. The link between Santa Maria Maggiore and the nativity is much older, though. Apparently, when it was built (5th century CE), the church had a “cave of the Nativity”, hosting some wood fragments belonging to the manger where Christ Child was laid. Now those fragments are preserved in a shrine near the altar of Confession.

Starting from the masterpiece of Arnolfo di Cambio, we have to talk about one of the most important religious Christmas traditions in Rome: the 100 “presepi”. “I 100 presepi” are an exposition that lasts for the whole Christmas period and it usually ends after the Epiphany. It was held for the first time in 1976 and it is not always in the same place. This year (2018) the fair is in via della Conciliazione 7 (very close to Saint Peter’s basilica in the Vatican) from December 7th to January 13th, 2019. The exposition takes its name from the number of “presepi” of the first editions. Nowadays, the number is much higher, and the “presepi” come in any shape and dimension, in the most various materials. Seeing this fair is an opportunity not to be missed. And so is the opportunity to take part in the Midnight mass, the night of December 24th, for those who wish to attend one. We are not talking about a regular celebration, but about the most famous one, the one held by the Pope in Saint Peter’s, that can be attended only with a ticket (always free). Without the ticket, it is still possible to attend the mass, standing outside in the Piazza with other tens of thousands of people. From the same spot, it is possible to assist to the blessing “Urbi et Orbi”, given by the Pope from the “Loggia delle Benedizioni”, “Loggia of Blessings”, to the City and the World. The blessing is given in many languages in order to make the Christian message universal. These are moments that Christians and not only should experience at least once in their lives. In Piazza San Pietro, it is impossible to forget the tradition of the Christmas tree that every year adorns some of the most suggestive piazzas in Rome. The main ones are in Piazza San Pietro, Piazza di Spagna, in front of the Colosseum and in Piazza Venezia. This last one last year became very popular because of its not exactly thick foliage. It was named “Spelacchio”, literally “hairless”. Poor tree!

Among the most important laic traditions linked to the Nativity, and so the solemn celebrations for Jesus’ birth, it’s impossible not to talk about the Christmas markets. Christmas markets are now a global phenomenon, and it is acquiring a very particular folkloristic importance. Diving into their environment makes us strongly experience Christmas and, like no other manifestations, gives us the feast atmosphere that irremediably conquers us. The most famous Christmas market in Rome (without undervaluing other very beautiful and popular ones, like the one in Piazza di Spagna) is with no doubt the one in Piazza Navona, now even internationally known. The artistic wonders of this Piazza, unique in the world, almost disappear, “submerged” by artists and street vendors offering in their stands any kind of game, entertainment, and delicacy. Moreover, kids can even take pictures with the many Santas and "Befane” in the Piazza. The “Befana” is a traditional Italian witch that brings candies to nice kids and charcoal to the naughty ones. They do the same in the piazza, giving socks with charcoal or candies. They can be found in the piazza especially in the days around January 6th, when they are supposed to visit the houses of the children. The day of the Befana closes the feast period, and Piazza Navona fills with a triumph of colors, music, and candies, attracting both children and adults. Among the laic traditions of the Christmas period, we have to dedicate a part of this text to the typical dishes of the Roman tradition. The celebrations for the Nativity officially start December 24th and the dinner, traditionally called “cenone”, “big dinner”, is rigorously "lean". This means that meat is not consumed. On every table, there are important variations, but fried food is never missing. Fried artichokes, zucchini, broccoli, potatoes, cardoons, codfishes, anchovies, squids together with the typical fried apples, cut in thin slices, follow a fish-based first course. The last course is the characteristic “puntarelle” accompanied by a piece of eel, called “carpionata” in the Roman dialect. The dinner ends with pastries of Lazio’s tradition, like the “tozzetti” or the “panpepato”. The lunch of December 25th is a triumph of flavors and calories. The typical courses are “lasagna”, “fettuccine”, “stracciatella” (egg in broth) and “abbacchio” (absolute protagonist of the Roman tradition). The “abbacchio” is a roasted suckling lamb, always accompanied by potatoes or artichokes. Artichokes in Lazio are also cooked in another way. They are called “carciofi alla Giudia”, and, since they are cooked in boiling oil that opens the leaves, they look like blossoming flowers. Also Saint Stephen (December 26th) is richly celebrated in Rome. On Saint Stephen's day, Roman families usually eat abbacchio ribs. So delicious! All of these feasts, that continue with the new year’s eve dinner and the lunch of January 1st, end with typical Italian Christmas desserts, such as Pandoro, Panettone, and Torrone, but also some typical Roman ones, such as Panepepato and Tozzetti, already mentioned, and Pangiallo. The Pangiallo, made with dried fruit, honey, chocolate, raisin, and candied fruit, is an example of culinary archaeology. Indeed, this dessert, with very few variations, was already popular in Imperial Rome. On new year’s eve, there’s the custom, all over Italy, of eating lentils. According to the Roman tradition, this legume brings money. For sure this saying comes from lentils’ peculiar shape, that recalls that of coins. Anyway, eat as much as you can … you never know!

Read 1044 times
Tweet
Published in Curiosità
More in this category: The Barbie from the Past »
back to top