St. Charles at the Four Fontains 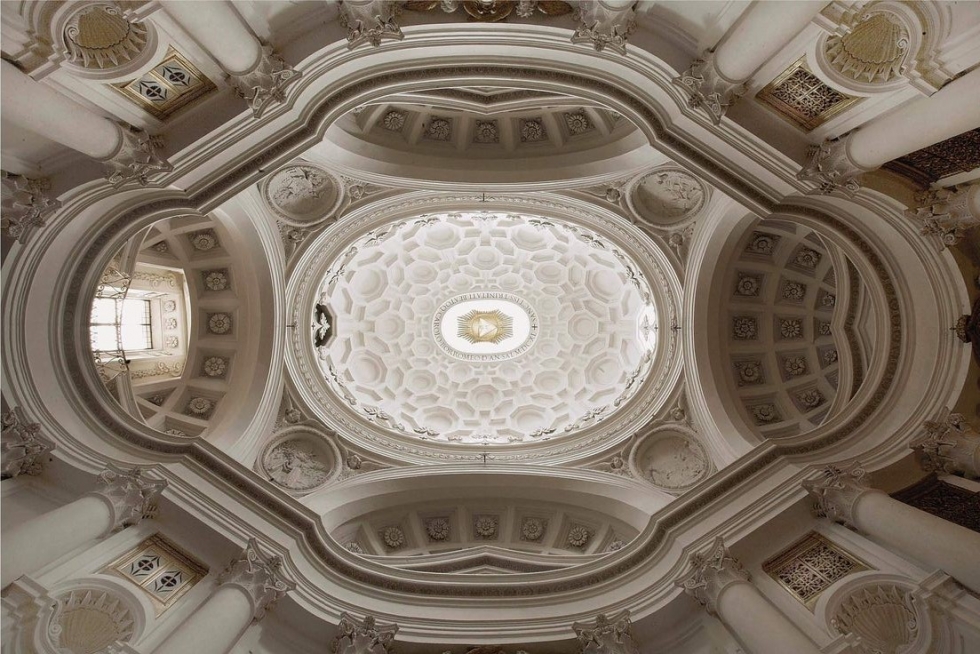 This church is located on via del Quirinale and stands as one of the most incredible architectural works of the XVII which was deeply studied in the upcoming century. It was dedicated to the Milanese archbishop Charles Borromeo who was consecrated in 1610. The construction of the church started in 1635 and ended some years after the death of the artist which occurred in 1667. The last external works were supervised by Borromini’ nephew between 1670 and 1680 following his uncle projects.

The map of Saint Charles at the Four Fountains is elliptical; the church has small dimensions and its walls seem to have an undulating shape; the internal structure appears both refined and dynamic. This effect is enhanced by the absence of sumptuous decorations and the predominance of the white colour. Entering the church we are overwhelmed by a great flare of light that underlines the architectural effects wanted by the artist.

The small cupola is made of bricks; it has an oval shape and consists of simple and elegant ceiling coffer illuminated by two small windows placed on the bottom of it. Another important fact about Saint Charles church. The reason of its very small dimensions is that  it’s believed to be as big as one of the four pillars of Saint Peter’s cupola. That’s why it is also called San Carlino. Borromini played with the walls as nobody else but he was also known as the architect of the “small”.

The cloister is of a superior beauty: a real oasis of calmness in the middle of the urban traffic. It has an octagonal map with a wonderful loggia characterized by tiny columns and an octagonal well in the middle of it. Beautiful is also the façade which – as the inside of the church – has an undulating shape as wanted by the artist who studied meticulously the decorative elements – such as columns, sculptures and recesses – to create important light effects. The crypt should have hosted the remains of the artist but he was then buried in the church of ‘San Giovanni dei Fiorentini’. Saint Charles at the Four Fountains was commissioned by the followers devoted to the Trinity who impeded his burial because he was a suicide victim. These people chose Borromini for the work not only for his great artistic skills but also for his vast esoteric knowledge. In fact in the church we can admire the architectural and ornamental elements gathered in groups of three, the number of the Trinity.

At last, we need to point out that outside this church there is a crossroad on which angles there are 4 big travertine fountains representing the Goddesses Diana and Juno, and the Rivers Tiber and Arno. That’s why the church is called Saint Charles ‘at the Four Fountain’.

Read 4136 times Last modified on Thursday, 24 January 2019 08:14
Tweet
Published in Chiese e Basiliche
More in this category: « The Basilica of Saint Praxedes
back to top