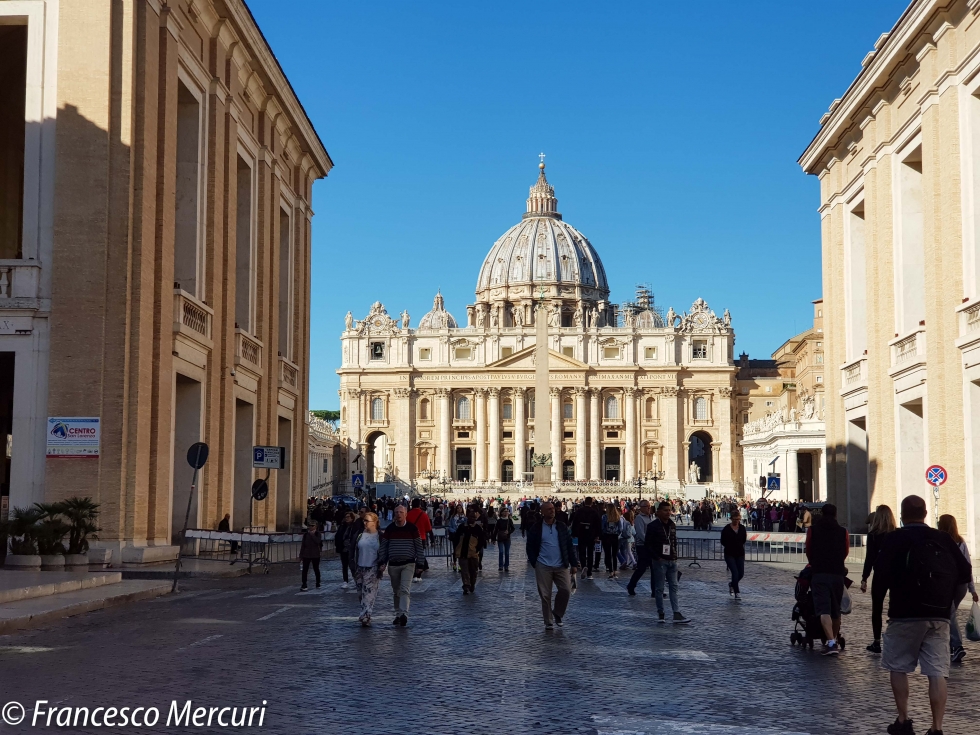 The first basilica was consecrated in 326 A.D. by pope Silvester I during the empire of Constantine, considered the first Christian emperor, although, most probably, ha was baptized only on his deathbed. This church, more than 120 metres long and almost 70 metres wide, had a plant with 5 aisles, separated by enormous columns collected by Roman monuments, and without transept. In front of the basilica there was a majestic atrium, accessible through a staircase. At the centre of the atrium, enclosed by a magnificent portico, there was a beautiful fountain made of an enormous pine cone sculpture of the first century B.C. almost 4 metres tall. The basilica we can see today is the result of a building work that started in 1506, by the will of pope Julius II. It was consecrated in November 18,1626, under Paul V papacy, exactly 1300 years after the consecration of the first basilica. Already in the 1400s some popes, most notably Nicholas V, thought about rebuilding the basilica that at this point, after more than a millennium, started to show some signs of structural failures. Therefore, at the beginning of the 16th century works started. Many architects work at the new building’s project, one after the other. Among these some are worth a mention: Bramante, that was the first, Raphael, Antonio da Sangallo the Young, Michelangelo, Carlo Maderno, creator of the wonderful façade, and Gian Lorenzo Bernini. To this last one we owe the huge colonnade that characterizes the square in front of the basilica and the staircase leading to the church’s entrance. Dimensions and numbers are unbelievable: 218 metres long (portico included), it had a 154 metres long transept. The central cross plant presents 3 aisles, the central one 46 metres tall and more than 25 metres wide. The portico is 71 metres wide, 20 metres tall and more than 13 metres long; there are 5 doors that give access to the basilica, on the right of the main doors there is the Holy Door, that can be opened only for the Jubilee. The first one was announced by Boniface VIII in 1300. The façade, that presents 9 balconies, is 114 metres long and 45 metres tall. Moreover, on the attic there are 13 gigantic statues (each 6 metres tall circa) representing Jesus, S. John the Baptist and 11 apostles. Peter is not among these, but rather, with Paul, on the staircase, almost welcoming the believers that want to enter the basilica. The dome, a masterpiece of Michelangelo, that never actually saw it completed, touches 136 metres from the ground. On top of it there is a bronze sphere with a cross on the summit. Also the diameter of the dome has some astonishing dimensions: almost 43 metres, that is the third largest dome in the world and the second one in stone, the first one being the Pantheon (Roman monument in the Eternal City too). Provided with 46 altars, 233 windows and 11 chapels, the church presents a total surface of 22.000 square metres and it is, for this reason, the largest Catholic church in the world. A fact is particularly striking, its capacity: inside of it there is place for 50.000 people. So awesome! It is impossible to make a list of all the treasures and masterpieces preserved in it; it seems a museum as well as it is a place of worship. Some of these masterpieces come from the old basilica, therefore, they are both from the Late Antiquity and from the Middle Ages. Others are the products of an extremely long and difficult to draft series of artists of the Renaissance and Baroque that, with their brilliance, made S. Peter’s Basilica one of the most extraordinary places on our planet. We will talk about these incredible works at a different time.